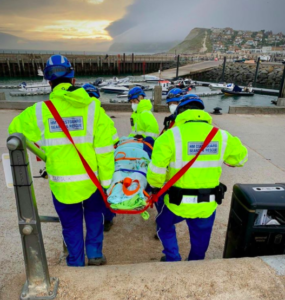 HM Coastguard dealt with the highest number of incidents on one day – last Friday (31st August) – since 2016.

The total number of incidents for the whole of the UK were 329, with 232 callouts for coastguard rescue teams. Lifeboats – both RNLI and independent – were called out 129 times, aircraft were sent out 22 times and hovercraft, three.

There was a high number of incidents involving people cut off by the tide and reports of missing children, as well as swimmers and paddleboarders getting into difficulty.

Call outs were heaviest in England, along the east and south coast and the north west. The area around Liverpool and the Wirral saw the most reported incidents at 26. The coast along Essex and Kent saw a total of 45 incidents and the coastline between Flamborough and Cromer, 22.

And the next day, it was lifejackets that helped save fishermen after their boat sank off the north west Scottish coast (August 1st).

The crew issued a Mayday call shortly after 2.30pm three miles off of Kinlochbervie. A Coastguard helicopter, Lochinver lifeboat and  Coastguard Rescue Teams from Kinlochbervie and Durness were sent out.

Three crew members were flown to hospital in Inverness by the Coastguard helicopter as they were thought to be suffering from hypothermia.

The remaining crew members were treated for the effects of the cold.

“There is no doubt that the fact these crew members were wearing lifejackets went a considerable way to helping save their lives,” says Scott Mackenzie, from HM Coastguard.