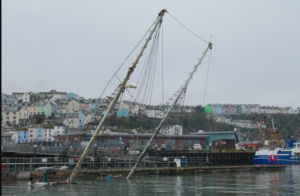 Sea Beast had been berthed on swinging mooring in the harbour for months before being moved alongside the pontoon, but was found submerged with only its mast above the surface (image above courtesy of Picture Devon).

The incident has sparked online controversy since the boat apparently released litter and fuel into the water – causing anger among people who fear the effect on wildlife.

“This time the vessel Sea Beast has sunk and releasing litter and fuel into the water. Authorities have been notified,” says The Seal Project on Instagram.

Criticism of the management of the situation has been rife, with commentators asking why the seemingly ‘abandoned’ vessel hadn’t been drained of fuel, and more care taken to solve the sinking problem before it arose.

“The fuel and oil were taken out already,” he says. “There was a generator onboard with a residual amount of fuel in it.”

Parnell says that this situation – of boats in advanced stages of deterioration cluttering harbours – isn’t rare.

“Lots of harbours suffer from end of life boats. Many harbours have creeks or beach where the ‘ghosts of boats past’ end up.

“Tor Bay is lucky in that it doesn’t have that, but also unlucky as it doesn’t have anywhere out of sight to leave boats until time, and funding, allows their disposal.”

Parnell says in his experience, boats tend to be abandoned as owners can’t afford to look after them and once the boat’s condition is poor, it tends to deteriorate quickly.

“It’s likely,” says Parnell, “that if the owner can’t afford to pay their dues, they cannot afford to maintain and repair their boat. Very quickly the boat will have no material value. Then the boat will get picked-over and broken into and rapidly deteriorate further.

“You end up with boats with no real value, which are bought by someone who will then have to do them up fast – those boats are cheap for a reason. Sometimes new owners can’t keep pace with the repairs required and it ends up with either sinking or scrapping. People say they’ve got insurance but that can be cancelled or not renewed.”

Sea Beast was moved alongside the pontoon last year, into a sheltered part of the harbour, with a decent enough draught to accommodate the concrete built vessel. But even so, the storms of the weekend caused it to sink. The latest owner’s schedule of repairs has, seemingly, been hampered by their home location – a situation exacerbated by Covid-19 and not being able to travel to affect the necessary repairs.

The cost of clean-up

“There will be be – potentially – £100K of fees,” Parnell says. “That’ll include repairing the damage caused and the disposal costs of a concrete hull. Plans are in place for the recovery work, which is expected to start shortly.”

According to Devon Online, Torbay Council says the owner of the boat has been told about the Sea Beast’s fate.

It was also revealed that the incident caused the pontoon at the harbour to become damaged, and will be out of action until repairs can be made.

“We would like to reassure members of the public that plans are underway for the recovery of the vessel,” Cllr Nicole Amil, harbour committee chairman for Torbay Council, told the website.

“During the poor weather the pontoon walkway was also damaged, repair works are being arranged and will be completed as soon as possible. Until the repairs are completed the pontoon will be out of action and to ensure everyone’s safety the gate at the top of the walkway will be locked.”

Sea Beast was originally towed into Brixham harbour by a local fishing boat after having problems with the rudder at sea. During its several years on the pontoon, the boat was used by RNLI lifeboat volunteers to demonstrate sea rescue exercises.

“Port authorities have to be careful as to the legal position when dealing with or disposing of ‘apparently’ abandoned vessels. These vessels are usually left in a poor and often dangerous condition with little value – whilst the vessel remains the owners responsibility. In reality it is usually the harbour authority that is obligated to remove and dispose of the vessel at its own cost, sometimes at significant cost and potential legal challenge, hence why things often progress slowly and every effort is made to find the legal owner.”