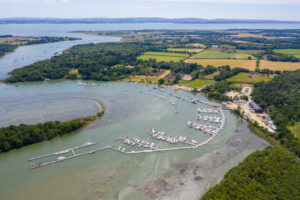 The £2m redevelopment of Buckler’s Hard Yacht Harbour will be completed this year, fitting as it’s also the 50th anniversary of the Beaulieu River marina.

Half a century since it was opened by Edward, Lord Montagu with round the world yachtsman Sir Chay Blyth CBE, BEM, the new-look marina contains 66 additional berths, many of which have already been allocated to new customers.

The reconfiguration and extension of the marina has taken place over two winter phases. The redevelopment has included a new black water pump-out facility as well as a new wash down area, enabling pressure washing to be undertaken in an environmentally sensitive manner. Beaulieu Enterprises Ltd has worked with agencies including Natural England and the Environment Agency to ensure the protection of the river’s unique habitats and species.

Management says that the redevelopment has been undertaken in a sustainable way and applied the same concept as the original designs. As much of the old infrastructure as possible has been refurbished and reused to maintain the unique character of the special area. New construction work was awarded to Fareham-based Walcon Marine which carried out the original build, with James Walters taking over the helm from his late father Robin.

“We are very pleased to mark this significant moment in the history of the Beaulieu River,” says Beaulieu Enterprises’ MD Russell Bowman. “It is fitting that the redevelopment should be completed in our golden anniversary year and we look forward to a bright future, with new and improved facilities while maintaining the charm of the river which has made it so popular over the last 50 years.

“It has been a pleasure working with Walcon Marine, which shares our vision of creating the highest quality marina for our customers. My thanks also go to Gosport-based specialist marina consultancy Marina Projects, who designed the new marina and has since project managed the redevelopment for us.”

A celebration is being planned for Saturday 1st May to mark the completion, with some of the original guests from the 1971 launch.